The Southwest Ranchi Jharkhand Region is in the state’s southwest corner, and although mining is present, most of its people still depend for their livelihood on farming and selling firewood and herbs in the local markets.

It is an area of jungles and hills, with more than 7,000 villages and 10 towns and cities spread among them. But the traditional lushness of the vegetation in some areas has been eradicated by an extensive drought, which is also threatening local agriculture. 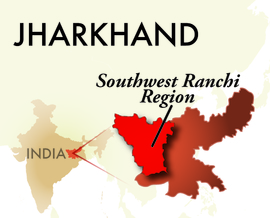