The Southeast Ranchi Jharkhand Region is in the southernmost part of the state. Its soil is rich with minerals, including gold, iron, nickel and bauxite. As a result, mining is a major industry there.

In the rest of the region, however, jungles and hills provide homes to the tribals who make up the majority of its inhabitants. There are at least five distinct tribal groups in the region, each speaking their own language. This is in addition to Mundari and Hindi, the region’s primary languages. The fact that the tribals are spread out through some 4,900 villages adds to the challenge of trying to visit them. 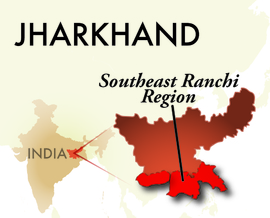