The Central Jasidih Region is part of the Santhan Pargana administrative zone, which is a separate homeland for the Santal tribe.

The majority of the region’s population are Santali. They live in almost 3,000 villages scattered throughout the area’s forests, where they practice their indigenous Sarana religion.

Most of Central Jasidih’s people, including the tribals, are farmers who are dependent on rainfall for their crops because they have no other irrigation system. Drought has plagued the area, leading to an increased level of poverty in recent years. 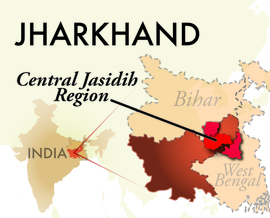