The Northwest Jasidih Region is called “A Symbol of Unity” because it is composed of one district in Jharkhand and one in Bihar, of which Jharkhand was a part until 2000. Both districts are underdeveloped areas with a combined population of nearly 3 million. The mostly tribal population lives in some 2,400 villages and 18 towns.

The tribal people follow their aboriginal customs of hunting, raising livestock and using traditional farming methods. They also gather wood and other materials from the forests and sell their finds in the local markets. While animism is strong among the tribals, both Hindus and Muslims are found among the non-tribal population.

As in other parts of Jharkhand, the people experience three seasons a year: summer (March–June), monsoon (mid-June–October) and winter (November–February). 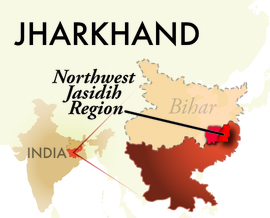