Known as “The Rising Sun,” the East Jasidih Region is blessed with an abundance of natural resources, but development has been hampered by a lack of transportation and communications infrastructure. The region is rich in minerals, including coal, clay, quartz and silica. Its beautiful black stone chips are used throughout Asia in decorative artisanship.

The East Jasidih Region’s residents include two major tribal groups, the Santal and Pargana, who live in more than 3,600 villages and 15 major towns.

The once-dense forests that covered much of the region have been largely cleared for agriculture, and the indigenous tribal people now work as farm labourers or have their own lands to farm. Animism is the prevailing religion, along with Hinduism and Islam. 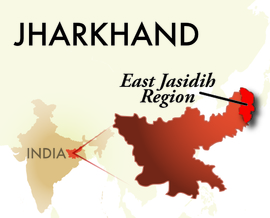