O Lord, we beseech you mercifully to hear us; and grant that we, to whom you have given a fervent desire to pray, may, by your mighty aid, be defended and comforted in all dangers and adversities; through Jesus Christ our Lord, who lives and reigns with you and the Holy Spirit, one God, for ever and ever. Amen.

Joseph Reveals Himself to His Brothers

Then Joseph could no longer control himself before all those who stood by him, and he cried out, ‘Send everyone away from me.’ So no one stayed with him when Joseph made himself known to his brothers. And he wept so loudly that the Egyptians heard it, and the household of Pharaoh heard it. Joseph said to his brothers, ‘I am Joseph. Is my father still alive?’ But his brothers could not answer him, so dismayed were they at his presence.

Then Joseph said to his brothers, ‘Come closer to me.’ And they came closer. He said, ‘I am your brother Joseph, whom you sold into Egypt. And now do not be distressed, or angry with yourselves, because you sold me here; for God sent me before you to preserve life. For the famine has been in the land these two years; and there are five more years in which there will be neither ploughing nor harvest. God sent me before you to preserve for you a remnant on earth, and to keep alive for you many survivors. So it was not you who sent me here, but God; he has made me a father to Pharaoh, and lord of all his house and ruler over all the land of Egypt. Hurry and go up to my father and say to him, “Thus says your son Joseph, God has made me lord of all Egypt; come down to me, do not delay. You shall settle in the land of Goshen, and you shall be near me, you and your children and your children’s children, as well as your flocks, your herds, and all that you have. I will provide for you there—since there are five more years of famine to come—so that you and your household, and all that you have, will not come to poverty.” And now your eyes and the eyes of my brother Benjamin see that it is my own mouth that speaks to you. You must tell my father how greatly I am honoured in Egypt, and all that you have seen. Hurry and bring my father down here.’ Then he fell upon his brother Benjamin’s neck and wept, while Benjamin wept upon his neck. And he kissed all his brothers and wept upon them; and after that his brothers talked with him.

A Maskil of Asaph.

Give ear, O my people, to my teaching;
incline your ears to the words of my mouth.
I will open my mouth in a parable;
I will utter dark sayings from of old,
things that we have heard and known,
that our ancestors have told us.
We will not hide them from their children;
we will tell to the coming generation
the glorious deeds of the Lord, and his might,
and the wonders that he has done.

He established a decree in Jacob,
and appointed a law in Israel,
which he commanded our ancestors
to teach to their children;
that the next generation might know them,
the children yet unborn,
and rise up and tell them to their children,
so that they should set their hope in God,
and not forget the works of God,
but keep his commandments;
and that they should not be like their ancestors,
a stubborn and rebellious generation,
a generation whose heart was not steadfast,
whose spirit was not faithful to God.

The Ephraimites, armed with the bow,
turned back on the day of battle.
They did not keep God’s covenant,
but refused to walk according to his law.
They forgot what he had done,
and the miracles that he had shown them.
In the sight of their ancestors he worked marvels
in the land of Egypt, in the fields of Zoan.
He divided the sea and let them pass through it,
and made the waters stand like a heap.
In the daytime he led them with a cloud,
and all night long with a fiery light.
He split rocks open in the wilderness,
and gave them drink abundantly as from the deep.
He made streams come out of the rock,
and caused waters to flow down like rivers.

Yet they sinned still more against him,
rebelling against the Most High in the desert.
They tested God in their heart
by demanding the food they craved.
They spoke against God, saying,
‘Can God spread a table in the wilderness?
Even though he struck the rock so that water gushed out
and torrents overflowed,
can he also give bread,
or provide meat for his people?’

Therefore, when the Lord heard, he was full of rage;
a fire was kindled against Jacob,
his anger mounted against Israel,
because they had no faith in God,
and did not trust his saving power.
Yet he commanded the skies above,
and opened the doors of heaven;
he rained down on them manna to eat,
and gave them the grain of heaven.
Mortals ate of the bread of angels;
he sent them food in abundance.
He caused the east wind to blow in the heavens,
and by his power he led out the south wind;
he rained flesh upon them like dust,
winged birds like the sand of the seas;
he let them fall within their camp,
all around their dwellings.
And they ate and were well filled,
for he gave them what they craved.
But before they had satisfied their craving,
while the food was still in their mouths,
the anger of God rose against them
and he killed the strongest of them,
and laid low the flower of Israel.

In spite of all this they still sinned;
they did not believe in his wonders.
So he made their days vanish like a breath,
and their years in terror.
When he killed them, they sought for him;
they repented and sought God earnestly.
They remembered that God was their rock,
the Most High God their redeemer.
But they flattered him with their mouths;
they lied to him with their tongues.
Their heart was not steadfast towards him;
they were not true to his covenant.
Yet he, being compassionate,
forgave their iniquity,
and did not destroy them;
often he restrained his anger,
and did not stir up all his wrath.
He remembered that they were but flesh,
a wind that passes and does not come again.

If anyone thinks that he is not behaving properly towards his fiancée, if his passions are strong, and so it has to be, let him marry as he wishes; it is no sin. Let them marry. But if someone stands firm in his resolve, being under no necessity but having his own desire under control, and has determined in his own mind to keep her as his fiancée, he will do well. So then, he who marries his fiancée does well; and he who refrains from marriage will do better.

A wife is bound as long as her husband lives. But if the husband dies, she is free to marry anyone she wishes, only in the Lord. But in my judgement she is more blessed if she remains as she is. And I think that I too have the Spirit of God.

The Rejection of Jesus at Nazareth

He left that place and came to his home town, and his disciples followed him. On the sabbath he began to teach in the synagogue, and many who heard him were astounded. They said, ‘Where did this man get all this? What is this wisdom that has been given to him? What deeds of power are being done by his hands! Is not this the carpenter, the son of Mary and brother of James and Joses and Judas and Simon, and are not his sisters here with us?’ And they took offence at him. Then Jesus said to them, ‘Prophets are not without honour, except in their home town, and among their own kin, and in their own house.’ And he could do no deed of power there, except that he laid his hands on a few sick people and cured them. And he was amazed at their unbelief.

The Mission of the Twelve

Then he went about among the villages teaching. He called the twelve and began to send them out two by two, and gave them authority over the unclean spirits. He ordered them to take nothing for their journey except a staff; no bread, no bag, no money in their belts; but to wear sandals and not to put on two tunics. He said to them, ‘Wherever you enter a house, stay there until you leave the place. If any place will not welcome you and they refuse to hear you, as you leave, shake off the dust that is on your feet as a testimony against them.’ So they went out and proclaimed that all should repent. They cast out many demons, and anointed with oil many who were sick and cured them.

“The Lord is looking for individuals who are emptied of self-sufficiency to accept prayerfully the challenge of reaching …lost billions with salvation. Through prayer you can intervene in these needy lives and situations — bringing the power of God into the lives of the lost and lonely.”
— excerpt from Road to Reality
—— Metropolitan Yohan 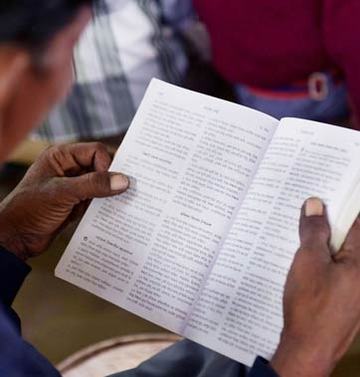 A chance to read the Bible on their own is a gift that every national missionary wants to give the people they minister among. You can provide a missionary and the believers he disciples with Bibles and New Testaments.