Grant to your people, Lord, grace to withstand the temptations of the world, the flesh, and the devil, and with pure hearts and minds to follow you, the only true God; through Jesus Christ your Son our Lord, who lives and reigns with you and the Holy Spirit, one God, for ever and ever. Amen.

Joseph Is Sold by His Brothers

Now his brothers went to pasture their father’s flock near Shechem. And Israel said to Joseph, ‘Are not your brothers pasturing the flock at Shechem? Come, I will send you to them.’ He answered, ‘Here I am.’ So he said to him, ‘Go now, see if it is well with your brothers and with the flock; and bring word back to me.’ So he sent him from the valley of Hebron.

He came to Shechem, and a man found him wandering in the fields; the man asked him, ‘What are you seeking?’ ‘I am seeking my brothers,’ he said; ‘tell me, please, where they are pasturing the flock.’ The man said, ‘They have gone away, for I heard them say, “Let us go to Dothan.”’ So Joseph went after his brothers, and found them at Dothan. They saw him from a distance, and before he came near to them, they conspired to kill him. They said to one another, ‘Here comes this dreamer. Come now, let us kill him and throw him into one of the pits; then we shall say that a wild animal has devoured him, and we shall see what will become of his dreams.’ But when Reuben heard it, he delivered him out of their hands, saying, ‘Let us not take his life.’ Reuben said to them, ‘Shed no blood; throw him into this pit here in the wilderness, but lay no hand on him’—that he might rescue him out of their hand and restore him to his father. So when Joseph came to his brothers, they stripped him of his robe, the long robe with sleeves that he wore; and they took him and threw him into a pit. The pit was empty; there was no water in it.

Ode for a Royal Wedding

To the leader: according to Lilies. Of the Korahites. A Maskil. A love song.

My heart overflows with a goodly theme;
I address my verses to the king;
my tongue is like the pen of a ready scribe.

You are the most handsome of men;
grace is poured upon your lips;
therefore God has blessed you for ever.
Gird your sword on your thigh, O mighty one,
in your glory and majesty.

In your majesty ride on victoriously
for the cause of truth and to defend the right;
let your right hand teach you dread deeds.
Your arrows are sharp
in the heart of the king’s enemies;
the peoples fall under you.

Your throne, O God, endures for ever and ever.
Your royal sceptre is a sceptre of equity;
you love righteousness and hate wickedness.
Therefore God, your God, has anointed you
with the oil of gladness beyond your companions;
your robes are all fragrant with myrrh and aloes and cassia.
From ivory palaces stringed instruments make you glad;
daughters of kings are among your ladies of honour;
at your right hand stands the queen in gold of Ophir.

Hear, O daughter, consider and incline your ear;
forget your people and your father’s house,
and the king will desire your beauty.
Since he is your lord, bow to him;
the people of Tyre will seek your favour with gifts,
the richest of the people with all kinds of wealth.

The princess is decked in her chamber with gold–woven robes;
in many–coloured robes she is led to the king;
behind her the virgins, her companions, follow.
With joy and gladness they are led along
as they enter the palace of the king.

In the place of ancestors you, O king, shall have sons;
you will make them princes in all the earth.
I will cause your name to be celebrated in all generations;
therefore the peoples will praise you for ever and ever.

Where is the one who is wise? Where is the scribe? Where is the debater of this age? Has not God made foolish the wisdom of the world? For since, in the wisdom of God, the world did not know God through wisdom, God decided, through the foolishness of our proclamation, to save those who believe. For Jews demand signs and Greeks desire wisdom, but we proclaim Christ crucified, a stumbling–block to Jews and foolishness to Gentiles, but to those who are the called, both Jews and Greeks, Christ the power of God and the wisdom of God. For God’s foolishness is wiser than human wisdom, and God’s weakness is stronger than human strength.

Consider your own call, brothers and sisters: not many of you were wise by human standards, not many were powerful, not many were of noble birth. But God chose what is foolish in the world to shame the wise; God chose what is weak in the world to shame the strong; God chose what is low and despised in the world, things that are not, to reduce to nothing things that are, so that no one might boast in the presence of God. He is the source of your life in Christ Jesus, who became for us wisdom from God, and righteousness and sanctification and redemption, in order that, as it is written, ‘Let the one who boasts, boast in the Lord.’

The Beginning of the Galilean Ministry

Now after John was arrested, Jesus came to Galilee, proclaiming the good news of God, and saying, ‘The time is fulfilled, and the kingdom of God has come near; repent, and believe in the good news.’

As Jesus passed along the Sea of Galilee, he saw Simon and his brother Andrew casting a net into the lake—for they were fishermen. And Jesus said to them, ‘Follow me and I will make you fish for people.’ And immediately they left their nets and followed him. As he went a little farther, he saw James son of Zebedee and his brother John, who were in their boat mending the nets. Immediately he called them; and they left their father Zebedee in the boat with the hired men, and followed him.

The Man with an Unclean Spirit

They went to Capernaum; and when the sabbath came, he entered the synagogue and taught. They were astounded at his teaching, for he taught them as one having authority, and not as the scribes. Just then there was in their synagogue a man with an unclean spirit, and he cried out, ‘What have you to do with us, Jesus of Nazareth? Have you come to destroy us? I know who you are, the Holy One of God.’ But Jesus rebuked him, saying, ‘Be silent, and come out of him!’ And the unclean spirit, throwing him into convulsions and crying with a loud voice, came out of him. They were all amazed, and they kept on asking one another, ‘What is this? A new teaching—with authority! He commands even the unclean spirits, and they obey him.’ At once his fame began to spread throughout the surrounding region of Galilee.

“Until we’ve learned to go to the cross and speak death to our ego–drives that lust against the Spirit, there can be no reality in the Christian life.”
— excerpt from Road to Reality
—Metropolitan Yohan

Note: At first it doesn’t look like there is enough juice, but as it marinates, you get more juice. 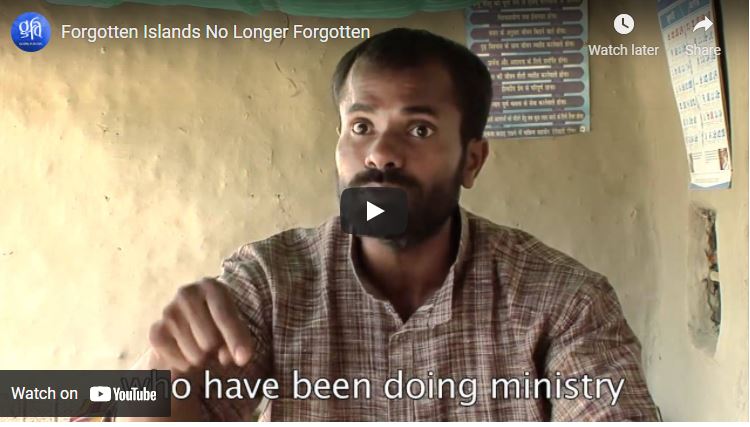 Meet people who have never even heard the name of Jesus. Find out how God is transforming the lives of these islanders through a group of committed GFA-supported national missionaries.