Super Cyclone Amphan, the strongest recorded storm in the Bay of Bengal, made landfall in West Bengal on May 20 with 115 mph hurricane-force winds. Millions left their homes to seek safety, yet evacuation efforts were hampered by the coronavirus pandemic and social distancing restrictions.

Storm surges, flash flooding and heavy winds are still putting millions at risk—including many impoverished families whose mud or thatch homes could easily be destroyed, if they haven't been already. Thousands of our congregations are suffering, and many have lost their church buildings.

GFA workers were on the ground stocking up supplies before the cyclone hit and are moving into action to bring relief as soon as possible.

With a wide reach 59 churches and several GFA Bridge of Hope centers in the West Bengal islands, we are in a unique position to provide aid where others cannot. Please join us today in the long-term relief effort to help the millions affected. 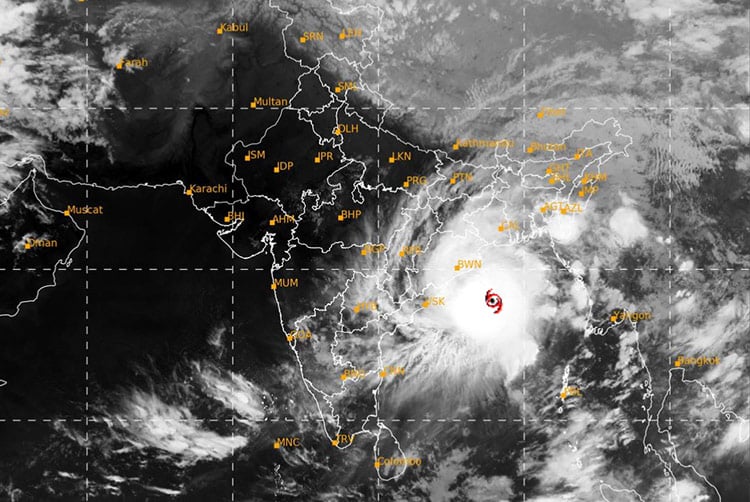 Read the timeline of relief events:

As Cyclone Amphan swept through eastern India and Bangladesh, many homes were obliterated. Its high winds brought terror as villagers scrambled for safety.

Jaanai, a villager in West Bengal, and his wife fled to the local GFA church for refuge when winds from the storm threatened their house.

“When I saw the strong wind started taking off the roofs and … tin sheets were flying all over the place, I got very scared and was very worried about my house,” Jaanai said. 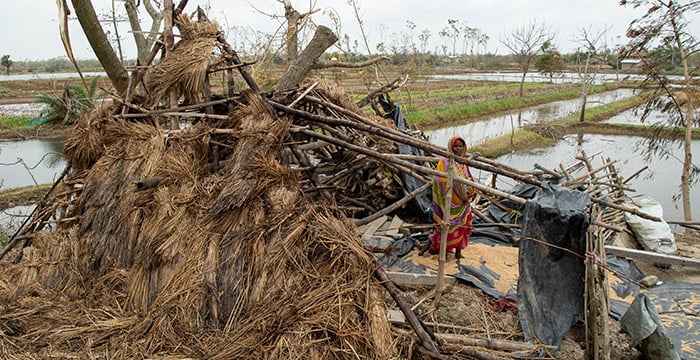 The following morning, once the cyclone had dissipated, Jaanai rushed to his home to discover what he feared had transpired.

“When I came, lo and behold, nothing was standing in the place of my house,” he said. “My house was totally gone.”

The cyclone had also brought in saltwater, which killed Jaanai’s freshwater fish in his pond, which had been a source of income.

“The fish will take time to grow and my ponds will have to be cleaned, because the seawater is now in the pond,” Jaanai said. “I won’t be able to farm another batch of fish unless I clean the pond; that will take time, and I don’t have money. And to build a small house like the one that I had, it will take me two or three years to come back to that normal life. That’s how I’m going to struggle.”

Another villager, Baadal, a 41-year-old day laborer in West Bengal, rushed his family to the safety of a nearby shelter when Cyclone Amphan’s winds began to tear apart his house.

“We could not even look to the direction of the wind because it was so strong,” said Baadal. “Things started falling apart and the trees started breaking. We had to rush to a safer place because our house started breaking.”

Baadal’s riverbank home was crushed between the wind and floodwaters, which engulfed his entire village. The storm also inflicted injuries to his arm and leg.

Baadal’s family walked away with only the clothes on their backs. Everything else was lost, including essential items and the little food they had stored. 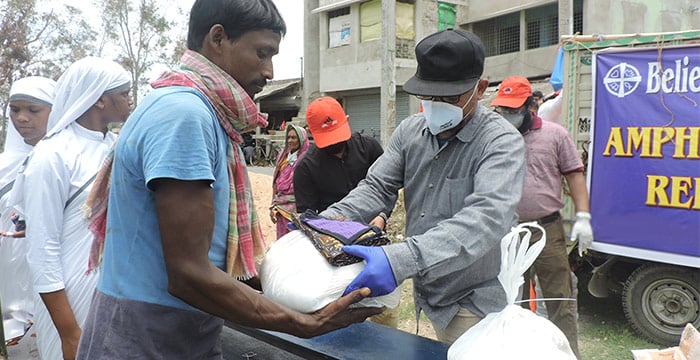 Villagers like Jaanai and Baadal (not pictured) received food packets from GFA workers after losing everything in the storm.

“I don’t think I’ll be able to work and save enough money so that I can build a house, because during this COVID-19 [pandemic], people have returned from other cities and they are jobless,” Baadal said. “So everyone is hunting for jobs, but then jobs are not available in these places. So I don’t know if I … will even get a job or some work in the village so that I can work hard and earn some money to build a house.”

These are just two of the many families devastated by this storm, which also destroyed many crops. With no shelter or food, people were left hungry and hopeless.

Bishop Justin Mor Thomas and GFA churches within his diocese have responded to this need in cooperation with local government officials, who have lauded the initiative taken by the church to stand with the neediest people in desperate times. The 25-member GFA team distributed relief materials, such as dry rations, hygienic items and clothes, to 415 families, including 250 widows, via the relief vessel Servant Boat II.

Ucchal, whose house completely flooded, said through tears, “If this aid was not given to me and my family today, we could have gone to bed with an empty stomach. Thank you for your care.”

The storm swept away 60-year-old Ghayth’s house and belongings. But he and his family received great comfort from the relief package the church gifted them.

“We lost everything and have nothing for our survival,” said 60-year-old Ghayth. “Thank you to the church and its leadership for standing with us in the time of need.”

Answered Prayer in the Midst of Devastation

While there is still little news from GFA partners serving in areas affected by Cyclone Amphan, we received one praise report from a church in Odisha. Though the storm’s strong rainbands uprooted trees as it made its way north into West Bengal, the church building only incurred minor damages to its roof and the cross affixed to it. Additionally, by God’s grace, the pastor, his family, the 60 church members and their houses are all safe. We thank God for His protection. 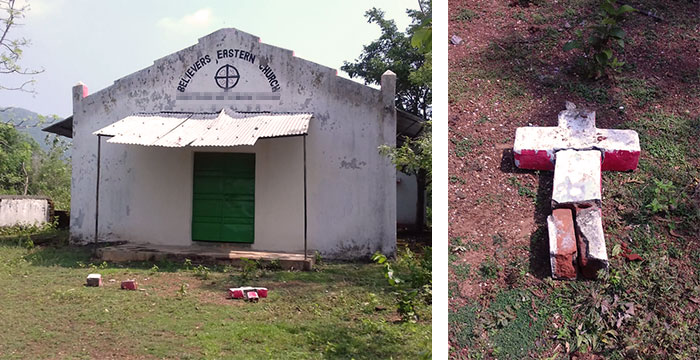 Elsewhere, the intense storm wrought devastation with high winds, heavy rains and tidal surges. According to news reports, 100 people so far have lost their lives, mostly due to falling debris, and millions have been displaced.

In the wake of the storm, authorities have begun the arduous recovery process. Early estimates indicate the storm likely caused $13.2 billion of damage in West Bengal alone.

Relief efforts, already complicated by the coronavirus, are hindered by fallen debris, which has made roads impassable. Response teams have begun clearing roads and repairing communication lines.

Please continue to pray for the people of India and Bangladesh as they recover and rebuild following this natural disaster.

With communications disrupted, news from our partners serving in the areas where Cyclone Amphan made landfall has been scarce. One recent report indicated that the furious storm “flattened houses and cast aside trees and electricity poles like matchsticks in six-and-a-half hours of monstrous fury that left Kolkata and most of South Bengal, Sundarban, 24 South (Islands), North Parganas, Howrah [and] Digha devastated and ravished.” Photos of our believers on flooded streets in Kolkata.

Regional church leaders in Kolkata have been unable to contact brothers and sisters serving on the Sundarban islands, but they are believing the Lord has protected them under His wings. One pastor and his family in Kolkata are known to be stranded in their flooded home.

News sources are saying that at least 84 people died as Cyclone Amphan stormed across India and Bangladesh. Many roads are flooded; thousands of people have been left homeless and 14 million are without power. 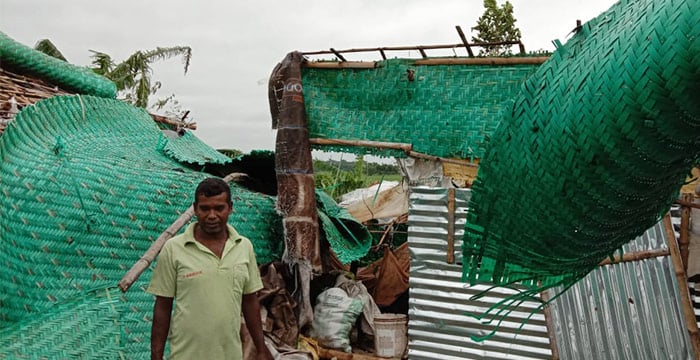 A believer in Kolkata in front of his destroyed home.

“It is a catastrophe,” said West Bengal Chief Minister, Mamata Banerjee, in a report from NDTV. “Area after area has been devastated.”

In the midst of the unknown, please continue to pray.

Cyclone Amphan made landfall in West Bengal, India, Wednesday afternoon, local time. With it came winds up to 115 miles per hour and surging waters as high as 16 feet. Though the storm weakened to the equivalent of a strong Category 2 hurricane—an answer to many people’s prayers—it has caused flooding, knocked over large trees, uprooted electrical poles and blew apart buildings.

Millions of poor villagers settled in shelters, while many others refused to evacuate for fear of the coronavirus. The pandemic has complicated emergency responses as relief teams struggle to bring aid while also protecting people from the risk of COVID-19.

At least 14 people are reported to have died in India and Bangladesh due to the storm. Many more are still in danger.

Amphan continues to move inland, with possible storm surges that could overwhelm low-lying areas and be catastrophic to millions of villagers who live in temporary homes with thatched or tin roofs. Up to 33.6 million people in India could still be exposed to the storm’s powerful winds. Flash flooding is also possible as the region becomes drenched with rain. 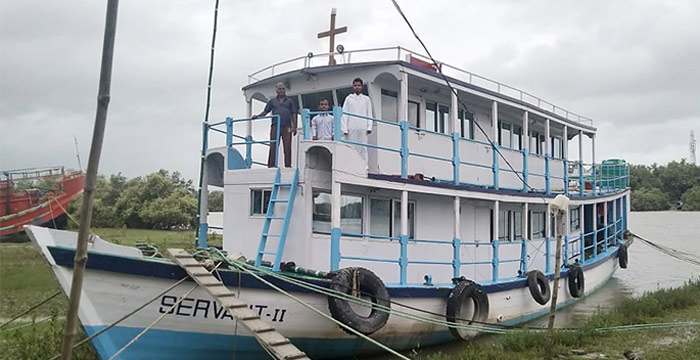 GFA’s Servant Boat team, which travels from island to island in the Sundarban region doing ministry, is on standby. The team, which is in communication with church workers from the most vulnerable and high-risk zone, prayerfully awaits opportunity to respond to relief needs.

“I come to you with a deep hurt, pain and burden for multiplied millions that are in extreme suffering,” said K.P. Yohannan. “Please take time to pray and fast for the suffering. … If you are able, this is the best time to share your resources … to help the suffering people in Bangladesh and the east coast of India. Thousands of our congregations are suffering. Many lost their church buildings. We must help.” 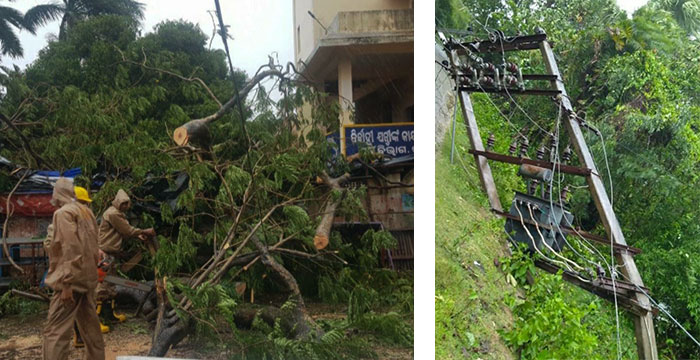 Thank you for your faithful prayers for the people facing this disastrous cyclone. Please continue to pray:

Millions of people in India and Bangladesh, already struggling from the effects of the coronavirus pandemic, are preparing for Super Cyclone Amphan, moving with the force of a strong Category 4 hurricane. With winds reaching 165 miles per hour, Amphan is the strongest storm ever recorded in the Bay of Bengal and is expected to make landfall on Wednesday, local time.

Forecasters warn this cyclone could be disastrous, with extensive damage from high winds, heavy rainfall, tidal waves and flooding, which could lead to landslides. Evacuations are underway in the Indian coastal areas of West Bengal and Odisha and in Bangladesh, but cyclone shelter capacity is diminished due to social distancing rules.

There are 59 GFA churches on the West Bengal islands, where people live in simple mud houses and church buildings are composed of bamboo. These simple structures could easily be obliterated by these forceful winds. There are also several GFA Bridge of Hope centres in the area.

Also in Amphan’s path is the Sundarbans, a cluster of islands in which there are approximately 60 GFA churches. One island is known as the “widows island,” where 18 Sisters of Compassion actively minister. There are also seven GFA churches along the coast in Contai and Digha.

GFA workers are already preparing to respond to needs in the aftermath of the storm. A team of young men have obtained government permission to take their boats to Bangladesh to help any who have experienced the devastation of the storm. Churches have also stocked enough supplies for 15 days to bring relief to affected communities. 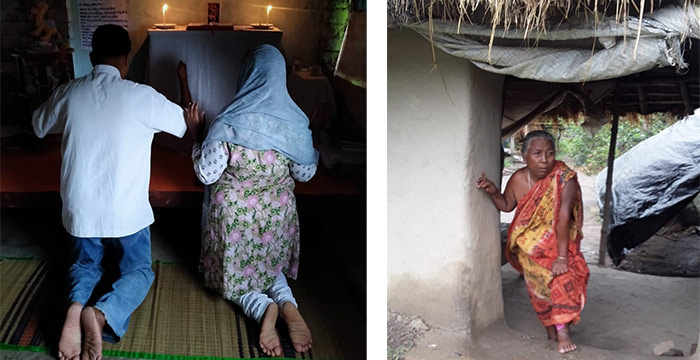 “I am asking you to join with me to look up and to activate your faith,” K.P. Yohannan says.

“God is on the throne and He is in control over all nature. We desperately need to pray for God's protection. In John 10:10, Jesus said it’s Satan's purpose to destroy everything. But our God is the One who is able to tell even the winds and the waves to be still. Please stand with me in prayer for protection over our brothers and sisters and the many who live in these areas without having yet heard the hope of Christ. I know you will.”