In 1974, K.P. came to the United States to attend Criswell College in Dallas, Texas. As a result of God’s calling, he and his wife, Gisela, dedicated their lives to bringing hope to the masses in the Indian subcontinent. They founded GFA World (Formerly: Gospel for Asia) in 1979.

K.P.’s weekly radio broadcast, Road to Reality, is heard on more than 200 radio stations throughout the U.S., Canada and Europe. He has authored more than 200 books, including Revolution in World Missions, a national bestseller with more than 2.5 million copies in print.

He holds an honorary Doctor of Divinity from Hindustan Bible College in India.

K.P. and Gisela have two grown children who both serve the Lord with their families. 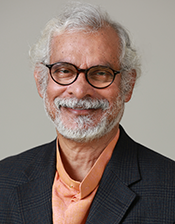 Dr. K.P. Yohannan is the founder of GFA World, a missions organization involved in reaching the unreached in Asian nations.

My relationship with God went from being a part of my life to the very essence of who I am.

God changed my heart, and got rid of bitterness, unforgiveness, pride and selfishness.