A while ago I burned my finger while washing a hot frying pan. I’ve come very close several times in the past, but this time around I did actually burn my finger. After the initial “That’s hot!” and the resulting “Wow! My finger smarts!” I started looking at the blister that was rising on my finger. 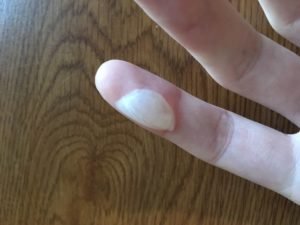 First there was the interesting factor that the tip of my finger was half again its normal size. That was fun, especially for typing. But more seriously was the realization that the blister was there for a reason. It was a shield; protecting the smarting and sensitive skin underneath while my body healed. It was a sterile environment where my body could focus entirely on building a new patch of skin and not have to station extra security details in order to prevent germs and dirt from getting into my body. Granted that it was a burn and not a gaping wound; that would have been a completely different situation.

As I was thinking over these things, and having fun with peoples reactions to my oversized finger (Please pop it!, What is that on your finger?, That’s gross!) it also gave me a new sense of how much genius (the word doesn’t go nearly far enough) that God put into creating my body.

Then I moved on to some other injuries. Broken bones knit together, cuts heal over, food poisoning washes itself out of your digestive system, pretty much anything that doesn’t kill you will heal after a fashion. Doctors or surgeons may be required to make sure that your bones are straight after a broken leg, or to stitch a nastier than usual cut. But God has built our body to fix itself in a marvelous manner.

I will praise You, for I am fearfully [and] wonderfully made; Marvelous are Your works, And [that] my soul knows very well.