The Joy of Following

One of the first things Jesus did in His public ministry was to call the four fishermen to follow Him. Throughout the Gospels we see Jesus calling individuals to follow Him some of which heeded the call and others who did not. However, they were all called to the same thing i.e. to follow Him. Some were called to give up their vocations, others their wealth, but all were called to follow.

The primary call of God seems to be one of following. Paul was called to the Gentiles and Peter to the Jews, but both of these callings would be encompassed in following God. What does it mean to follow Jesus? As I mentioned previously, it requires us to give up something. However, if we focus only on what we give up we miss the point and often become defined by what we don’t pursue rather than by the One we do pursue. Some have pointed that when we choose to follow Christ we must take up our cross as He took up His. This is true, but we must remember the goal isn’t to take up the cross. Taking up the cross is merely the process on our way to the goal. I have sometimes lost my focus on Christ because I was focusing on the cross and suffering that I was to take up. It is not suffering in itself that we are to pursue but Christ who lies beyond the suffering. In the same way Christ pursued the goal set before Him and accepted His cross. In Hebrews 12, the author of Hebrews tells us the goal Christ had to enable him to bear His cross.

Therefore, since we are surrounded by so great a cloud of witnesses, let us also lay aside every weight, and sin which clings so closely, and let us run with endurance the race that is set before us, looking to Jesus, the founder and perfecter of our faith, who for the joy that was set before him endured the cross, despising the shame, and is seated at the right hand of the throne of God.Consider him who endured from sinners such hostility against himself, so that you may not grow weary or fainthearted.

It was for joy–the joy of reconciling the world to himself–that Christ despised the shame. I recently had the privilege to study a portion of Colossians chapter two. The one thing that continually stood out to me was the triumph that Christ had in the cross. A believer from the early centuries of Christianity said of the passage that Paul had never spoken with a more lofty tone. Through th 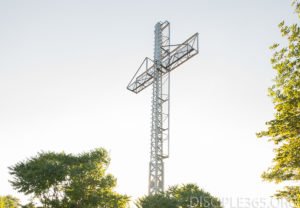 e cross and the shame of it, Christ received the joy that was set before Him and now He is seated beside the Father.

As Christ had a joy set before Him, so we also have a joy set before us. Because of this joy, we can endure the cross that we take up despising its shame. We will be united with Christ in Heaven and because of this fact anything that the world and the enemy hurls against us in this life will be worth it when we see Christ face to face.