Growing up I spent a lot of time reading about wars our country fought in history books and stories of soldiers who gave their all for their country. The sacrifice that they showed for their country was a great influence on me, but I am afraid the concept of fighting for something no matter what it costs others also influenced me too greatly. I saw the glory of being a hero, while ignoring how much it has the potential of hurting others. 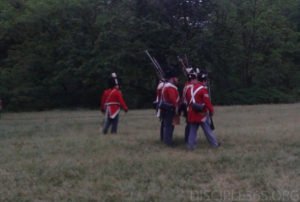 Throughout Scripture we have many instances of the Christian life illustrated in a military manner. Such as: weapons of our warfare II Corinthians 10:4; Armour of God Ephesians 6:11-18; fighting the good fight of faith I Timothy 6:12, there are many other examples as well. However while I emphasized in my mind this side of Christianity I ignored other Scriptures such as “Matthew 9:13 Go and learn what this means, ‘I desire mercy, and not sacrifice.’ For I came not to call the righteous, but sinners.”, or Micah 6:8 He has told you, O man, what is good; and what does the LORD require of you but to do justice, and to love kindness, and to walk humbly with your God?”.

As a result of ignoring these verses as well as others, I have run roughshod over many people, far too many. The result was that I hurt many people in my life that the Lord had placed there for me to minister to. Because of this militaristic mindset, I began fighting for what I saw as the truth no matter who it hurt. The result of this was that I began alienating myself from many of my fellow believers. In a conversation with someone about three years ago, he pointed out to me that I was not showing love in a particular situation, but rather I was being harsh on several individuals. He was right, but I refused to receive what he was saying. In fact I took it as a badge of honour that someone was criticizing me for doing what was “right”.

Recently God has been opening my eyes and showing me what it looks like to love. For a long time, God has been teaching me how he loves me, but now he is instructing me in how to love others. One of the major ways is by serving others as Galatians 5:13 instructs us. Another is showing compassion on those who have not come to the same maturity as I believe I have in a certain area. I have also come to realise that I cannot have my own personal interpretation of Scripture. Many times I take how I understand Scripture as the standard and I get frustrated and judgemental if others do not see it the same way. The Christian life does indeed have military parallels of fighting to the end. However, in pursuing this end we must remember to have compassion, mercy and love for others.